The Power Of Colors

Colors have the ability to evoke emotions and change our attitudes. They can inspire and motivate us to try something new and bold. They can alter our moods and appetites; even make a room feel small and cramped, or large and spacious. 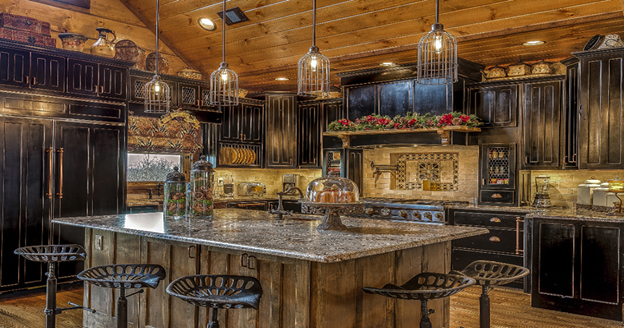 If you plan to redecorate a few rooms this year, the right color choices can make all the difference in the feeling you’re trying to achieve. Better yet, it’s one of the simplest and most affordable decor changes you can make. Not sure which colors to choose? Here is one of the best 2019-2020 color palette for home interiors, according to the Pantone Color Institute:

Which goes on first? Stain or sealants?

The answer to this question depends mainly on which sealant is used and how you want your home to look.

If you’re using Perma-Chink chinking, we recommend staining your home first with a Lifeline stain of your choice, then seal the log gaps with Perma-Chink, and finish with Lifeline Advance Topcoat. The application of Advance will make the home easier to clean (recommended two times per year).

On What Type of Home Does Perma-Chink Log Home Chinking Works Best?

By Tony Huddleston, VP of Sales and Operation 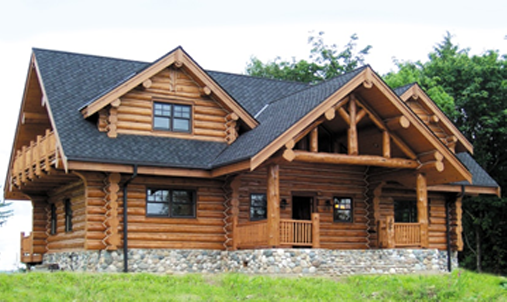 Perma-Chink was designed to eliminate the undesirable results often obtained by using older less successful methods of wood slabs, mud, and cement types of chinking, as basically they did not work well over the long haul. So it became a constant worry or job to re-chink or repair the failing products. Most of the products used did not have any degree of flexibility or they did not adhere to wood that well. The results were cracking cement caused by the stress of the logs shifting or shrinking. The resulting failure often allowed separation between the chinking and the log surface allowing water intrusion, and possibly early wood decay. So as for a particular type of home, yes Perma-Chink is designed for any home that incorporates a specific joint design where it could be employed. For example; the large timber square logs that use a dovetail system as seen throughout the Eastern United States, as well as the large handcrafted round logs from the Western part of the United States. These homes were designed to be chinked from the start.

What to do if your log home was flooded? 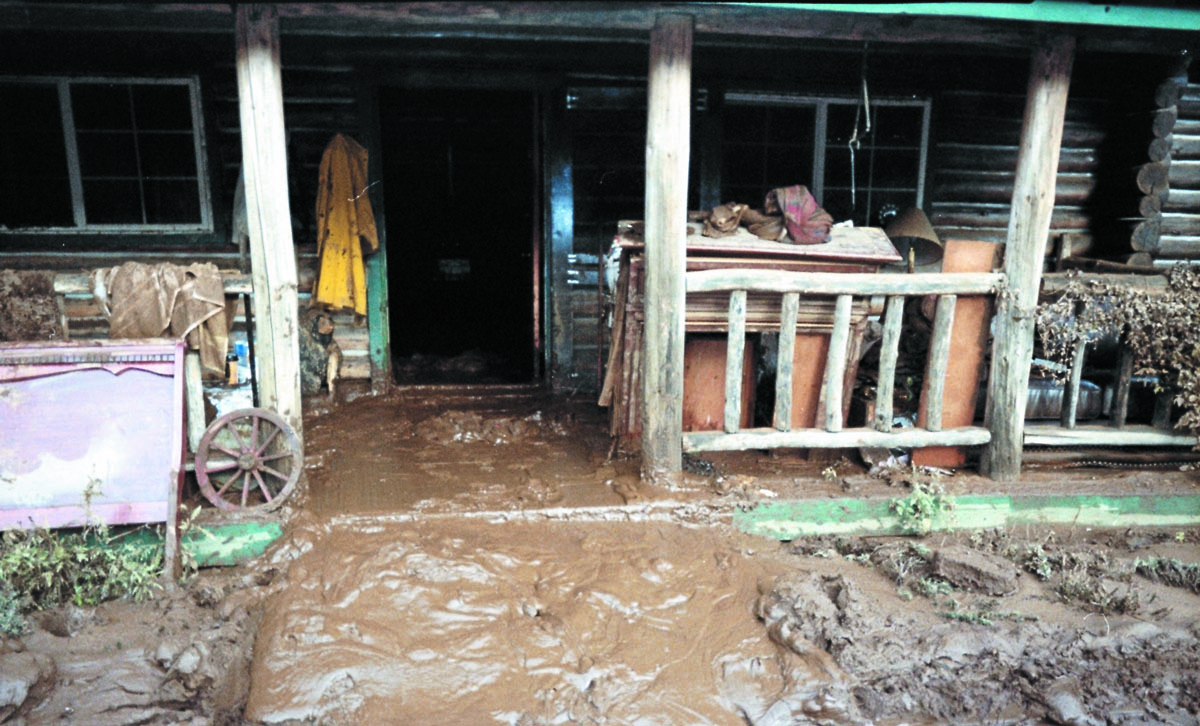 Log homes are actually more durable than traditional homes, and are more likely to survive natural disasters, including flooding. The clean-up and repair of a log home after flooding is also much easier; follow these steps...

The Dynamics of Weathering for Round Logs, Square Logs and Log Siding 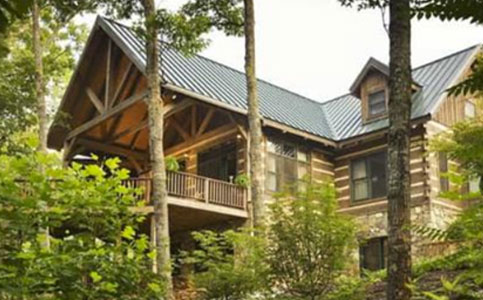 The profile of the logs has a significant impact on the weathering characteristics of a wall. The effect of sunlight and the weather on round logs is altogether different than on square logs or flat, vertical siding. 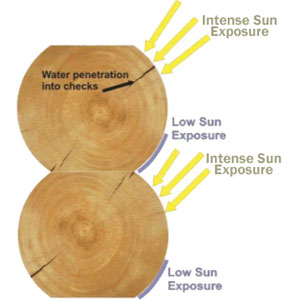 The top third of a round log is subjected to much more intense weathering than the bottom third. In cold weather climates snow and ice can accumulate on the upper third while the bottom third remains somewhat protected. Upward facing checks that have formed in the top section of the log will funnel rainwater directly into the interior of the log where it can soak into the surrounding wood. But most damaging of all is the angle of the top third of a round log towards the sun. The top third of round logs catches many times more UV light than the bottom third. Besides exposing the wood to more UV exposure, the UV inhibitors in the upper third may become used up, whereas in the lower third they may still be active. Over time this can result in a noticeable difference in color and signs of weathering between the upper and lower sections of the logs. Providing some maintenance to the upper sections of round logs without creating lap marks or color differences can be accomplished, but it may be a bit of a challenge. The key is to do the maintenance before the wood becomes gray due to photo-oxidation.

Is the Clear Topcoat Really Necessary? 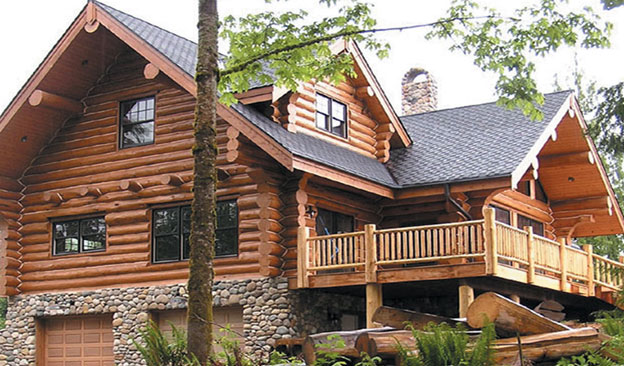 When talking about wood stains one question that is frequently put to our customer service representatives is "Is a topcoat really necessary?” Actually a more accurate question would be, “Is a topcoat worth the extra cost and effort to apply?"

Rather than giving a simple answer we will discuss the benefits of topcoats and let you decide after you read this.

Every homeowner has found checks in the logs at one time or another. Checks are those longitudinal splits that appear as logs lose their moisture. While you may like or dislike checks, they are a part of the character of wood. Some species of wood are more susceptible to checking than others. This susceptibility comes from the different rate at which wood shrinks in its own geometry. Because wood dries out from the surface, the wood at the surface shrinks faster than the wood further down in the core.

Here we present the TOP Log Home Manufacturers in the USA and invite you to visit their websites and see what they have to offer. Each manufacturer is outstanding in quality of craftsmanship, and this is not a ranked list.

The ONE-and-ONLY Log Home Chinking You Need to Know - PERMA-CHINK!

Through a molecular technology breakthrough, Perma-Chink Systems created a blister-proof, no-slump log home chinking that provides superior adhesion and elongation, is heat and age resistant and yet is highly workable for ease of application.

Perma-Chink was the first synthetic log chinking produced in 1981. There have been many significant changes made in formulations to improve the adhesion, flexibility, and longevity.

We are proud to announce our new supply of the widest range of dispensing tools in the industry from Albion Engineering Company. Albion is a high quality alternative to the tools typically found in hardware stores and do-it-yourself outlets. Professional tools, built to last.

1. The Albion Bulk Loading Caulking Gun is our most popular tool for applying Perma-Chink or Energy Seal. It is built to meet the demands of serious professionals, utilizing rugged, heavy-duty all steel drives and lightweight aluminum barrels to reliably dispense a wide range of materials.

What Does Summer Heat Mean for Your Log Home Exterior Staining Project?

Tips on Improving Your Home in Order to Increase Resale Value

Two of the Best Indoor Maintenance Projects to Complete During Winter